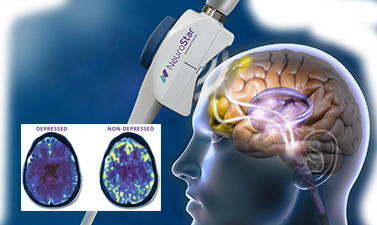 Many Benefits of TMS Therapy

Magnetic energy similar to what is used in an (MRI) is used to stimulate the areas of the brain that are sluggish and causing depressed mood.

TMS Therapy is Safe and Effective

Clinical trials have demonstrated the safety and effectiveness of NeuroStar® TMS Therapy in treating patients who have not benefited from prior antidepressant medication. NeuroStar TMS Therapy was studied in adult & teen patients suffering from Major Depressive Disorder, all of whom had not received satisfactory improvement with previous treatments.

What is TMS Therapy?
TMS stands for transcranial magnetic stimulation. It is used to treat depression by stimulating the brain non-invasively using electromagnetic fields, similar to those produced by an MRI machine. During TMS Therapy, a magnetic field is administered in very short pulses to the part of the brain that research has demonstrated to be associated with depression. The typical initial course of treatment is about 19-37 minutes daily over 4-6 weeks.

How does TMS Therapy work?
The NeuroStar TMS Therapy system uses short pulses of magnetic fields to stimulate the area of the brain that is thought to function abnormally in patients with depression. The magnetic field produces an electric current in the brain that stimulates the brain cells (neurons). This results in changes that are thought to be beneficial in the treatment of depression.

Is NeuroStar TMS therapy covered by my insurance?
It usually takes time for healthcare insurers to establish coverage policies for newly approved treatments such as NeuroStar TMS. However, many commercial and Medicare plans have recognized the effectiveness of treating depression with TMS Therapy and now cover TMS as part of their plans. See here for a full list of insurance plans that cover TMS.

Is TMS Therapy a good alternative for patients who cannot tolerate the side effects associated with antidepressant medications?
NeuroStar® is non-systemic (does not circulate in the blood throughout the body), so it does not have side effects such as weight gain, sexual dysfunction, nausea, dry mouth, sedation, etc. The most common side effects reported during clinical trials were headache and scalp discomfort – generally mild to moderate – occurring less frequently after the first week of treatment.

Font Resize
Contrast
Accessibility by WAH
Call Us Text Us